Recently, Associate, Derrick H. Dye, successfully argued in a Motion to Dismiss for Failure to State a Claim Upon Which Relief Can Be Granted, that a direct suit against an insurance company for the tort of "negligent issuance of an insurance contract" is not a claim recognized under Maryland law.

In this suit, the creative Plaintiff sued the driver of the vehicle in which he was a passenger, but also brought a direct claim against that driver's insurance company, arguing that the insurance company had a duty to the public-at-large to properly screen potential insureds for aggressive behavior, criminal activity, etc., prior to issuing that potential insured a policy of insurance.  The Plaintiff's argument, in a nutshell, was that insurance companies should not offer insurance to persons with criminal backgrounds, or to those who have a history of driving recklessly, dangerously, or with disregard for the safety of others.

Mr. Dye successfully convinced the Circuit Court for Baltimore City that such a claim is, in fact, contrary to public policy and is not recognized under Maryland law, and the claim against the insurance company was dismissed with prejudice.  Practically speaking, if insurance carriers were to deny coverage to persons with histories of reckless driving, for fear that insuring such individuals could result in claims such as the above being filed in court, the persons that most need to be insured might not be, which could result in an increase in uninsured motorists on the road.  This is something that Maryland, and indeed most states in the union, have sought to do away with by enacting compulsory insurance laws.

RSRM Associates Admitted to the Bar of the U.S. Supreme Court

The firm extends hearty congratulations to Associates James Buck and Tara Barnes, both of whom were admitted to the Bar of the United States Supreme Court on December 5, 2012, in a ceremony before all nine of the Justices, and officiated by Chief Justice John G. Roberts, Jr. 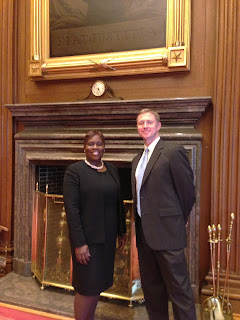 Mr. Buck and Ms. Barnes traveled to Washington, D.C. with several other members of the Baltimore City Bar Association last Wednesday for the admission ceremony, which was held in open court before a packed court room.  After the ceremony, the new admittees enjoyed front-row seats to a very animated oral argument before the Court involving an international child custody case.  At the conclusion of the argument, the group was given a behind-the-scenes tour of the courthouse. 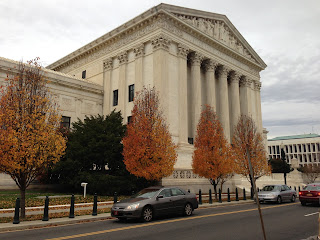 The rear of the Supreme Court Building. 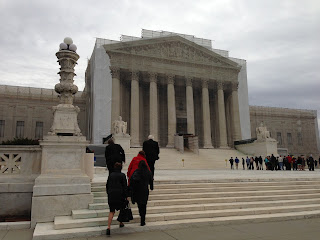 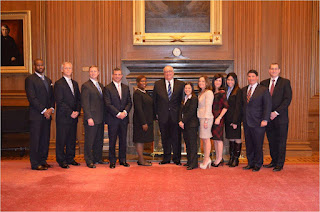 The group of new admittees and the movant, Andrew Radding,
President of the Bar Association of Baltimore City.
Posted by Rollins, Smalkin, Richards & Mackie, L.L.C. at 9:03 AM No comments:

Five attorneys from RSRM have been selected for inclusion in the Maryland "Super Lawyers" 2013 issue, which is available now.


Super Lawyers selects attorneys using a rigorous, multi-phase process. Peer nominations and evaluations are combined with third party research. Each candidate is evaluated on 12 indicators of peer recognition and professional achievement. Selections are made on an annual, state-by-state basis. Approximately five percent (5%) of nominees are selected as "Super Lawyers" and approximately two-and-a-half percent (2.5%) of nominees are selected as "Rising Stars."
Posted by Rollins, Smalkin, Richards & Mackie, L.L.C. at 8:09 AM No comments: