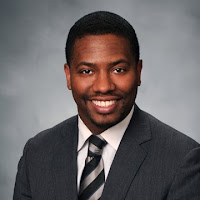 While attending law school, Mr. Upshur competed on the ABA Labor and Employment Mock Trial Team, practiced as a Rule 16 student attorney in the Civil Advocacy Clinic, and served on the executive board of the University of Baltimore Black Law Students Association.

Following law school, Mr. Upshur clerked for the Honorable Lynn Stewart Mays on the Circuit Court for Baltimore City. Prior to joining RSRM, Mr. Upshur worked as an attorney with Office of the Attorney General for the State of Maryland, where he represented the Maryland Transportation Authority.

Mr. Upshur joined the Firm in April 2019. His practice focuses on insurance defense.

This case arose from a robbery that occurred at Park West Health Systems in Baltimore City on March 30, 2015.  Michael Johnson, a Park West employee, was robbed at gunpoint by an unknown assailant.  Following the assault, Mr. Johnson provided Park West with a description of the assailant’s clothing, which Park West determined to match that of David Cofield—a Park West patient who reportedly exited the facility shortly before the robbery. Park West provided this information to Mr. Johnson as well as law enforcement authorities.

A Baltimore Police Department (“BPD”) detective, leading the investigation, presented Mr. Johnson with a photo array, which included Mr. Cofield’s photograph. Mr. Johnson failed to identify anyone from the photo array, but the detective nonetheless issued a warrant for Mr. Cofield. The detective provided a partial investigative file to the Office of State’s Attorney, which failed to include the negative results of the photo array. The State’s Attorney’s Office indicted and incarcerated Mr. Cofield for four months until the prosecuting attorney learned about the negative photo array and dismissed the charges.

Following his release, Mr. Cofield filed a nine-count Complaint against Park West, contending that Park West violated HIPAA regulations and his privacy rights by releasing his photograph and description. Mr. Cofield also filed a six-count Complaint against the BPD and lead detective for civil rights violations. In trial court, Mr. Cofield reached a settlement with the BPD and lead detective, but Mrs. Taylor and Mr. Beasley moved for summary judgment on behalf of Park West, arguing that Park West was not negligent because it did not breach a duty owed to Mr. Cofield under HIPAA, but even if it did, any such breach was not the proximate cause of Mr. Cofield’s alleged injuries. The trial court agreed with Park West and granted summary judgment, concluding that there was no evidence that any negligence on the part of Park West proximately caused the injuries to Mr. Cofield, especially given the negative photo array.

Mr. Cofield appealed to the Maryland Court of Special Appeals, arguing that Park West’s negligence in making the disclosure lead to his wrongful arrest, conviction, and incarceration. Park West countered that its disclosure did not proximately cause Mr. Cofield’s injuries, the injuries were not a reasonably foreseeable result of the alleged negligence, the injuries could be attributed to other superseding causes, and that HIPAA was not designed to prevent the type of harm suffered by Mr. Cofield. The Court of Special Appeals agreed with Park West, finding that Park West and Mr. Johnson acted in good faith in response to a felony, their actions did not proximately cause Mr. Cofield’s injury, and the harm suffered by Mr. Cofield was not the type of harm that HIPAA was designed to prevent. Park West merely disclosed Mr. Cofield’s name, photograph, and a physical description—nothing concerning his treatment. Therefore, the Court concluded that the trial court correctly granted judgment in favor of Park West and Mr. Johnson.

Congratulations to our attorneys on their win!

On February 6, 2007, while fighting a fire, Jesse Kelleher (“Kelleher”) injured his left knee.  Kelleher subsequently filed for temporary total disability and permanent partial disability with the Workers’ Compensation Commission (the “Commission”). On December 12, 2008, the Commission found that Kelleher sustained a thirty percent (30%) permanent impairment of his left knee and awarded him compensation for the injury.  In July 2011, Kelleher filed a Request for Modification of his award as a result of his deteriorating condition. In October 2011, the Commission found that Kelleher sustained a thirty-five percent (35%) permanent partial disability, or a five percent (5%) additional deterioration of his left knee.

The Commission held a hearing on the matter.  Prior to, and during the hearing, the County did not file issues pursuant to Code of Maryland Regulation (“COMAR”) 14.09.03.02.  The County also did not object to Kelleher’s Request for Modification at the hearing.  Instead, on the day after the hearing, the County submitted a letter to the Commission alleging Kelleher’s Request for Modification was outside the applicable five-year statute of limitations under L.E. § 9-736(b), and thus the Commission could not modify the award. The County further argued that Kelleher filed each of his Requests for Modification without first obtaining a written evaluation of impairment as required by COMAR 14.09.03.13(d) and 14.09.09.02(b).

Kelleher’s counsel responded by arguing that the applicable case law only required Kelleher to present medical evidence of the deterioration at the time of the hearing, rather than at the time the Request for Modification was filed. The Commission ultimately found Kelleher’s permanent partial disability to his left knee had increased to forty percent (40%), demonstrating a five percent (5%) deterioration. The Commission considered the arguments raised regarding the statute of limitations and found that the Request for Modification was not barred by the statute.

The County appealed to the Circuit Court for Montgomery County.  Kelleher requested a jury trial and proposed two issues for the jury to consider: (1) whether the Request for Modification was filed, with a “basis in fact,” within the five-year statute of limitations period pursuant to L.E. § 9-736(b); and (2) the nature and extent of the deterioration of Kelleher’s left knee.

The circuit court determined that Kelleher’s first question involving the statute of limitations was a question of law and denied Kelleher’s request to propose it to a jury. The circuit court then reversed the Commission’s decision finding that Kelleher had not filed his Request for Modification with a written evaluation of permanent impairment as required by COMAR 14.09.09.02.  Kelleher filed a Motion for Reconsideration, or in the alternative, to Remand; however, the court denied Kelleher’s motion.  Kelleher then appealed the matter to the Maryland Court of Special Appeals.

The Court of Special Appeals concluded that the circuit court did not err in denying Kelleher’s request for a jury trial because the limitations question was a question of law. Further, the Court found that the parties did not disagree on when Kelleher filed his Requests for Modification, that he did so without first obtaining a written evaluation of permanent impairment, and when he obtained his final permanency ratings. As a result, the Court concluded that there were no disputes as to any material facts, and Kelleher was not entitled to a jury trial on the issue.

The Court of Special Appeals then determined that the lower court did not err in finding that Kelleher’s claim was barred by the statute of limitations.  Kelleher’s Request for Modification did not satisfy the requirements imposed by the regulations because he filed a Request for Modification without first obtaining a written evaluation of permanent impairtment as required by COMAR 14.09.09.02.

Kelleher claimed that Dove v. Montgomery County Bd. Of Educ. required him to only provide (at the time of filing) relevant medical information in his possession to the other involved parties.  178 Md. App. 702, 715-16 (2008).  The Court noted that Dove was decided prior to the Commission’s adoption of the applicable COMAR regulations.  Additionally, the Court found that Dove required the claimant to apply for a worsening of permanent impairment with a basis of fact, which is complementary with COMAR 14.09.09.02.  Id. at 714.

Kelleher further argued that the County waived the statute of limitations issue because it raised the issue after the Commission’s hearing, rather than in an Issues form prior to the hearing.  The Court of Special Appeals found this argument without merit because Kelleher cited to no legal authority to support that contention.  Moreover, the Court cited COMAR 14.09.03.02, which provides: “[a]fter the claim has commenced, any party may raise an issue by filing an Issues form, available on the Commission website.”  The discretionary language of COMAR 14.09.03.02, therefore, did not require the County to affirmatively plead the limitations defense.

Kelleher also contended that the Commission made a factual determination regarding whether he had a “basis in fact” to file a Request for Modification, that the finding was prima facie correct, and should not have been reversed as a matter of law.  The Court disagreed, maintaining that Kelleher’s question was a purely legal question, as opposed to a factual question, and therefore, the Commission’s findings received no deference pursuant to L. E. §9-745 (b).

Finally, Kelleher insisted civil due process required that a court refrain from ruling on an issue that was not raised before the Commission. The Court of Special Appeals countered with the fact that Kelleher was afforded the opportunity to, and did, in fact, respond to the County’s post-hearing letter regarding the statute of limitations.  It also remarked that Kelleher had the burden of proving that his action was initiated within the prescribed time period, but Kelleher failed to meet this burden.

Ultimately, the Court indicated that the County’s statute of limitations argument was not moot solely because the County paid Kelleher’s award. L. E. §9-736 does not stay an award of compensation, and thus, County was obligated to pay Kelleher’s award despite the appeal.

This case illustrates the various arguments defense counsel could use when confronted with a statute of limitations issue.  It should be noted, however, that this is an unreported opinion and should not be relied upon as legal authority.