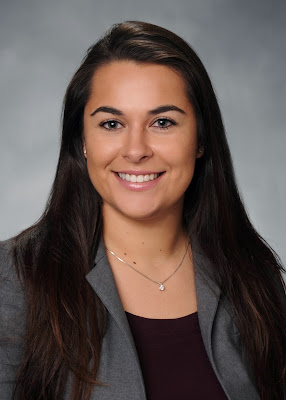 While attending law school, Ms. Bond was a competing member of her school’s National Trial Competition Team, where she placed as a regional semi-finalist.  She also served as a Rule 16 attorney in the Bronfein Family Law Clinic.  Following law school, Ms. Bond was an associate with a criminal defense firm, where she represented clients in Maryland circuit and district courts in complex criminal matters.

Ms. Bond joined the RSRM team in November 2017.  The focus of her practice is workers’ compensation and insurance defense.
Posted by Rollins, Smalkin, Richards & Mackie, L.L.C. at 7:12 AM 1 comment:

In Rochkind v.Stevenson, the Maryland Court of Appeals held that the trial court abused its discretion when it admitted a physician’s expert testimony pursuant to Md. Rule 5-702(3) linking a Plaintiff’s ADHD diagnosis with lead poisoning, when the physician relied on studies that did not adequately demonstrate a causal link between lead exposure and a general and specific ADHD diagnosis.

In the fall of 1991, 10-month-old Starlena Stevenson resided at a 3823 Fairview Avenue, which was owned in part by Stanley Rochkind.  The Fairview residence contained flaking and chipped paint.  Lead testing performed decades later revealed lead-based paint on multiple interior and exterior surfaces at the Fairview residence.

By age 5, Stevenson was diagnosed with ADHD and prescribed medication after being evaluated by psychologist Dr. Stephen Ley.  Stevenson continued to suffer other mental illnesses as she got older, including depression and auditory hallucinations.

In December 2011, Stevenson sued Rochkind in the Circuit Court for Baltimore City for negligence and violations of the Maryland Consumer Protection Act.  In February 2013, pediatrician Celia Hall-Carrington, M.D. drafted a report concluding that that Stevenson was poisoned by lead at the Fairview residence, and that the lead poisoning was a significant contributing factor to all of Stevenson’s neuropsychological problems, including her ADHD.

The case proceeded to trial, and the jury awarded a verdict in Stevenson’s favor; however, the trial court granted, in part, Rochkind’s motion for new trial, ordering a new trial on the issue of damages alone.  Before the second trial in October 2014, Rochkind renewed motions in limine, which had been raised before the first trial, requesting that the court exclude Dr. Hall-Carrington’s testimony that Stevenson’s lead exposure caused Stevenson’s cognitive defects, specifically ADHD.  The trial court denied Rochkind’s motions.

Dr. Hall-Carrington’s opinions relied on an EPA publication entitled “Integrated Science Assessment for Lead” (“EPA-ISA”), which posits that “multiple, high quality epidemiological studies” revealed “a causal relationship between lead exposure and attention decrements, impulsivity, and hyperactivity in children.”  Dr. Hall-Carrington testified during the second trial that the epidemiological studies found that children with blood-lead levels similar to Stephenson’s can have attention problems.  Dr. Hall-Carrington conceded that the EPA-ISA did not mention ADHD specifically, but testified that the EPA-ISA contains a listing of ADHD symptoms.

Following the second trial, the jury returned a verdict exceeding $1.4 million.  Rochkind filed a motion for a new trial, which the court denied.

As a case of first impression in Maryland, the Court of Appeals relied upon the rationale of the United States Supreme Court in General Electric Co. v. Joiner, 522 U.S. 136 (1997), holding that the trial court abused its discretion in admitting Dr. Hall-Carrington’s testimony that lead poisoning caused Stevenson’s ADHD.  In doing so, the Court of Appeals pointed to the fact that, although the studies cited in the EPA-ISA link lead exposure and attention deficits and hyperactivity, those same studies do not state that lead exposure causes ADHD. More importantly, the court further noted that EPA-ISA finding of a lead-associated increase in ADHD was “not a major consideration,” and that an ADHD diagnosis is also attributable to factors such as socioeconomic status and parental education and caregiving.  Without any other scientific evidence or epidemiological studies to support the opinions that lead exposure causes ADHD in general, or specifically in Stevenson’s case, the court found that Stevenson failed to meet her burden in demonstrating that Dr. Hall-Carrington based her testimony on an adequate supply of date as required by Maryland Rule 5-702(3).

This case is important to Maryland attorneys and insurers when consulting and retaining experts in all fields.  In doing so, it is crucial that the expert be able to base his or her opinions on scientific research and studies that sufficiently support the expert’s opinions.  If there is any perceived “analytical gap” between the expert’s data and his or her conclusion(s), Rochkind v. Stevenson paves the way for Maryland trial courts to exclude, or truncate, the expert’s testimony.